The Mercury is a Low frequency receiver (15KHz - 4MHz) and would normally accompany a Marconi Electra HF receiver 100KHz - 30MHz. We don't have an Electra, but as the Mercury was frequently used with an Atalanta, we show the Electra in our 1950s bay with the Atalanta. 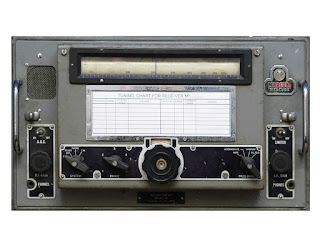 This set sufferd from the usual maladies of age: shorted or leaky capacitors, below: 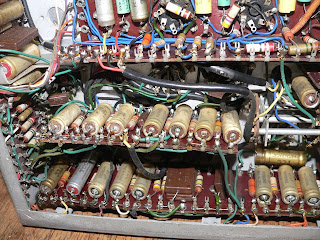 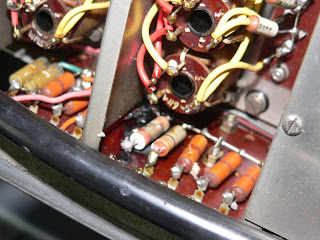 All the wax paper and elctrolytic capacitors were replaced during summer 2017: 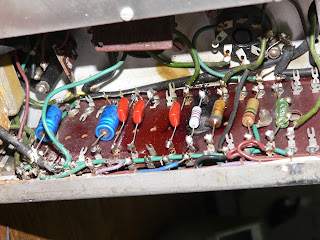 The set was then re-aligned and now performs very well. Surprisingly it will resolve SSB very well using the BFO. It is sufficiently stable to hold a QSO, but will drift after about 15 minutes.

Internal Fire is a working museum and pursues a policy of maintaining exhibits in working order. While we try and use original parts where possible, electronics can be surprisingly difficult particularly for small parts. While it is possible to obtain “New-Old Stock” TCC Capacitors like the leaky ones shown above, they will still be in the order of 50 years old and, quite possibly, no better than the parts we are replacing. As a consequence modern replacement capacitors and resistors are frequently used for the sake of reliability and safety.